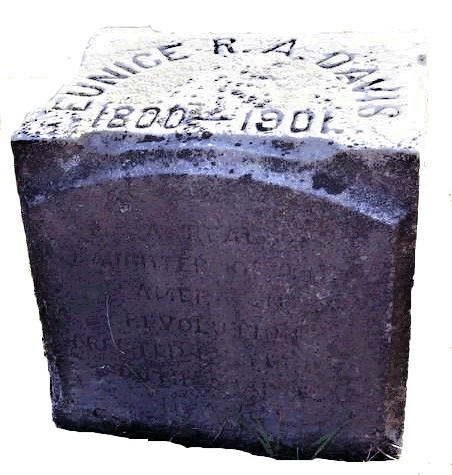 Eunice Russ Ames Davis was the daughter of Prince Ames of Andover, Massachusetts, an African American, who fought for U.S. independence, from 1777 to 1783.  Ms. Davis was born in 1800 — 62 years before the Emancipation Proclamation.  She was 31 during the Nat Turner rebellion and 96 when the U.S. Supreme Court legalized segregation.  When she turned 100 in 1900, she was the oldest living abolitionist and a member of Boston’s Old South Chapter of the Daughters of the American Revolution. Her identity became known in 2008 with the publication of “Forgotten Patriots, African American and American Indian Patriots in the Revolutionary War.”

Thousands of enslaved and free black persons performed countless patriotic acts and served as soldiers, sailors, marines, and civilian workers in the cause of independence and the creation of the United States of America.

Even more saw the Declaration of Independence as a call to run away from the tyranny of slavery wherever it led.  Others argued that the phrase “all men are created equal” validated petitions asking courts and legislatures to set them free.

While many earned the freedom they sought, only gradually, and sometimes grudgingly, are they gaining recognition for the durability of their achievements. The reason: Up to two generations ago, history and government were complicit in a cover up and human beings were not free to choose where to sit or stand.

Less fortunate contemporaries of the 1776 generation continued to be bought and sold on and around the Mall.  Later, their great-grandchildren were excluded from public places on Pennsylvania Avenue in the sightline of the Capitol, White House and Washington Monument.

As the last of them died off through the 1840s, including residents of Washington, D.C., they witnessed the continued carving up of the fruits of independence among those who perceived slavery and segregation as a right secured to them by the founding fathers.

In the face of seemingly unbending willpower, the descendants of the forsaken men and women of the American Revolution served the nation nobly through every war and peaceful interlude.  No depravation or indignity could cause them to suspend their patriotism or scorn the promise of 1776.

Offspring imbibed their example that liberty only flourishes if the principles of the union, and the union itself, are safeguarded by the fellowship of its citizens.  “…I do expect it (the nation) will cease to be divided. It will become all one thing or all the other,” Lincoln cautioned in 1858.

Some in Congress in the 1980s, who promoted a memorial and acknowledged the preeminent value of the history, had been officeholders during Jim Crow, including Sen. Strom Thurmond, the former segregationist governor of South Carolina.

The 50th anniversary of the 1963 March on Washington reminds us of how far America has journeyed.  However, landmarks in Area I could tell the whole story of triumph spanning 10 generations, if the National Liberty Memorial comes to share their sightlines.

The Revolutionary War, national independence, Civil War and the Civil Rights Movement affirm that their vision for America prevailed.