The role of African Americans in the American Revolution, although now documented beyond any doubt, is not common knowledge or understood in the context of American history. Pioneering black historians since the mid-1800s have researched and written about the subject. A fascinating trail existed, but there was no rush, until the late 1980s, to follow it deeper – to wherever it leads.

Considered the most elucidating work, “The Negro in the American Revolution,” by Dr. Benjamin Quarles, arrived in 1961 as the Civil Rights Movement mobilized on the unfinished business of generations.

However, 24 years later, when Dr. Quarles testified before Congress on a predecessor memorial in 1985, perhaps, only around 1,500 African American soldiers were discoverable by patching together various circulating books and listings. Historians still could only estimate that 5,000 served based upon what they perceived from “hidden” records.

The past 26 years have seen explosive interest. Hundreds of books and articles explore individual exploits and ambitions.  Scores of descendants awakened to discover and document ancestors unknown or unappreciated for generations.

The pace of research suggests that more and more African Americans each year will embark on journeys of discovery. This will lead to awareness either not imagined, or wrongly contemplated with trepidation 50 years ago.

In 2008, the Daughters of the American Revolution published “Forgotten Patriots, African American and American Indian Patriots in the Revolutionary War.” The research commenced in 1984 at the behest of Lena Santos Ferguson, who was thought to be only the second black member.  The third installment of the research over 24 years, however, includes the name of the first woman of African descent to become a DAR member.

At the outset, James Dent Walker, the project’s genealogist, said “Every estimate is deceptively low…. No one took the time to examine the records.” Twenty-four years later, historian Gary B. Nash told the Hartford Courant, “Now we have names, and that’s important to historians, and we have concrete evidence of how many black soldiers there were, rather than a rough guess.” 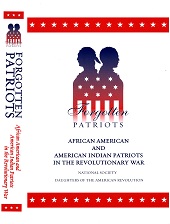 “Forgotten Patriots” lists over 5,000 named African American patriots and soldiers. Many more slaves performed vital civilian functions: entries cite them only as “African American Men” (“5 [unnamed] Negroes of [master’s name].”). Records may not exist to reveal their identities even to the most enterprising.

Still, the research strongly suggests there could be considerably more named soldiers awaiting discovery. While muster rolls and pension applications often do not contain descriptors suggesting race, other creative methodologies may unlock new identities in the future.